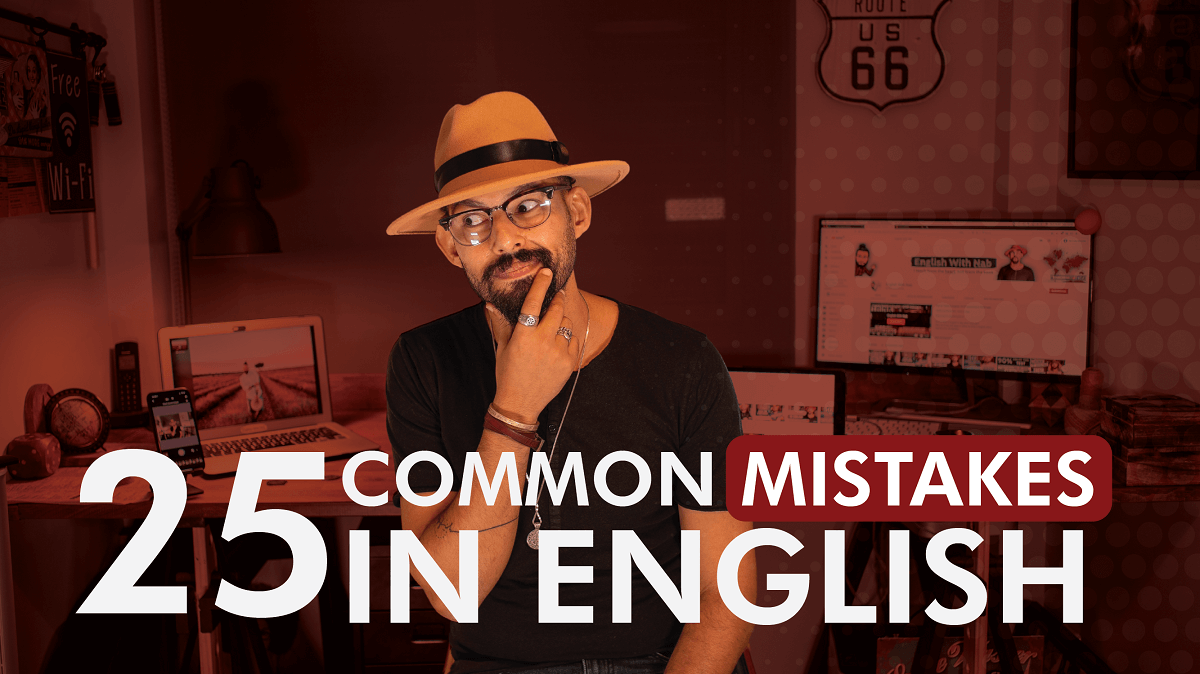 Even after years of education, there are some things that some people still mess up. For me, it’s algebra. For others, maybe languages or science. And for many, it’s grammar.

You made an English mistake, and you’re feeling so embarrassed!

Your face feels hot and you’d like to disappear.

That’s okay. Embarrassment is universal, and everyone makes mistakes when learning a new language. But you need to make mistakes in order to learn better!

Like I always say: you best teacher is your last mistake!

English, like many other languages, has its own set of tricky rules. But with a little bit of practice and help from guides and videos like this one, you can become a grammar master.

Are you guys ready?

Let’s get the ball rolling!

We gonna start with this one, and believe me this it’s very very common, when I’m traveling people usually ask me these questions:

There’s nothing deeply wrong with the structure of ‘Take me a picture’, it just sounds slightly off for two reasons. First of all, ‘take’ is not commonly used with an indirect object.

The other problem is that (as a favor to me, as per requested by me, in order to help me, etc), but doesn’t say that the picture is to be taken OF me.

It sounds more like I just wanted a picture of something else taken for me. For example: ‘I’m so sad I can’t be there, take me a picture!’ Still a bit awkward because of the indirect object, but the meaning is more clear.

So the right sentences are:

Here is another example:

In English “have” cannot be used to talk about one’s age, moreover we use it when we own something, and when we ask about age, we use the verb TO BE. How old are you? So, the answer must be with the verb TO BE: I AM 30 years old.

Well, “advice” is an uncountable noun in English (like “water” or “sand”), and as such, it has no plural form:

Thus, we speak about the amount of advice, not the “number of advices” 🙂

Since it is uncountable, we cannot say “an advice”. We would usually say just “advice” (without an article), or, if it is necessary to emphasize that we think about it as about one piece of information, we use “piece of advice”

In questions, we always put the auxiliary verb first, that can be verb like TO BE, CAN, WILL, HAVE , and if there is no helping verb we put the verb DO.

Remember we should put the Auxiliary verb in this case (Do/Did) + the subject (YOU) + the main verb (GO)…. like the example :

“Must, should, can, may, might, could, would, will” are words that come before the subject in the questions (auxiliary verbs like the previous example).

When asking a question, the subject should be followed by an auxiliary verb. So, the structure in general should be question word like: Where/What/How/Which etc. + auxiliary verb + subject + main verb.

That isn’t correct. The right way to ask this question is:

If you start a question with: “Do you know”, “would you like”, “could you tell me” … ETC we call it indirect questions, and we don’t change the order of the words.

And if you have two people in the subject, it is polite to put the other person first.

But then if you talk about yourself in the subject of the sentence, you have to use ME.

But then when we have two people in the subject, some people say my mother called my brother and I ❌ ,

That’s not correct! The right way is “My mom called my brother and me”✅ because me is the object pronoun.

And if you are not sure here is a trick. For example:

Let’s take out my brother, see if it sounds right:

Remember: other person always goes first. (People say to remember it, think of the other person before yourself to be polite).

The right answer is:

The verb which comes after the auxiliary verb, in this case (DID or DOES), always will be the base for “infinitive” form. In other words In English, negatives are made by putting (NOT) after an auxiliary verb, for example:

Be, have, do, etc, followed by the infinitive of the verb, but without (TO).

Prefer is always followed by TO. We use “prefer” to say we like one thing or activity more than another. So that’s why we can use a prepositional phrase with to when we compare two things or actions:

We don’t use than after prefer:

NOTE: We can use a to-infinitive or an -ing form after prefer.

A to-infinitive is more common. For example:

“that of yours” means “the price of your smartphone”

‘that of’ and ‘those of’ are used for replacing singular and plural nouns, respectively.

When we talk about our opinion, we use phrases such as ‘in my opinion’ or ‘in our view’:

We use the present simple to talk about permanent facts and general truths. In this example we don’t expect the situation to change.

And, we use present continuous (the ING form) for actions that are happening now, or to talk about something temporary.

In this example we do expect the situation to change.

Like what I am doing now: I am teaching you English, while you read this article 😉

Here are some examples:

So, “I haven’t received the item yet” sounds like you’re still expecting it to show up. When you use yet in a sentence, it implies that the event is still continuing in the present. Hence, did should be replaced by have.

Therefore, “yet” means still; until the present time or until now. For example:

To be interested is not the same as being interesting.

The same applies to other English phrases such as bored and boring, or excited and exciting.

Here is a general rule to help you remember the difference:

When talking about yourself or your feelings, use the –ed ending.

When talking about others or something outside yourself, use the –ing ending.

One of the typical mistakes my students make is using the preposition “to” with the verb “arrive”.

For example: We arrived to New york.

The preposition “to” can never follow the verb “arrive”, because it is a preposition of movement and the verb is not. Instead of “to”, we can use “at” or “in”.

But, when should we use one or the other? The answer is easy:

We use “at” when we get to a small place such as an airport, station or village.

We use “in” when we get to a large place such as a country or a city.

(arrive in because London is a city)

Be careful – we use arrive without a preposition in the following cases:

The verb explain is not followed by object pronoun. It can’t be followed by a pronoun like me, him, her, you or us that is the object of the verb, or the pronoun that receives the action of the verb.

We don’t use the indirect + direct object construction with “explain”:

The verb explain has a very specific sentence pattern. Remember this when you want to use explain in a sentence.

With the verb marry we always use TO and NOT with.

In English, we can’t have a “double negative” (not + no) in the phrase. Use any- instead:

We also use any- in questions:

Equipment is an uncountable noun, so you cannot say one equipment or two equipments,

Like the previous mistake, “luggage” is an uncountable noun, that being said, you cannot say one luggage, two luggages etc, but you can say one piece of luggage, two pieces of luggage.

So, that’s why we say University. yoo·nuh·vuh·suh·tee.

The correct one is:

The verb say never takes an indirect object: said me, Said her, said you…

say something (to somebody)

The verb “tell” usually needs to take an indirect object, for example told me, tell her…

Which one do you think is the most common one?

Please share it with all your friends and family!

1 thought on “25 common mistakes in English”