(and how to teach your students)

Students learn how consonant sounds change depending on the letter before and after. For example, the ‘c’ in “consonant” makes the same sound as:

Two consonants blend together to make a new sound. The most common consonant blends include:

When teaching blends, it is effective to introduce them in groups. For example, a teacher may introduce the l-blends first:

Introducing blended sounds in groups is most effective.

Consonant digraphs: Two consonants that make a single sound when paired together, such as the “ph-” in “phonics.” The most common digraphs include:

When introducing the concept of blends and digraphs, visuals such as cue cards often help.

Some vowels sound similar to the non-English speaking ear and time should be spent practicing sound differentiation at the beginner levels. Picture cues can be displayed in the classroom so students have a reminder of vowel sounds when required.

There are three types of vowel sounds:

Consonant-vowel-consonant words (CVC) – Three-letter words with consonants at beginning and end and a short vowel in the middle.

Diphthongs – Vowel sounds which glide one into the other, such as /ei/, /au/, or /ʊə/. Take a look at the following diphthong chart:

A good exercise to practice identifying the difference between single-vowel sounds and diphthongs is to give students a handout which contrasts monophthongs and diphthongs. Teachers read aloud one of the words and students circle the word that they hear.

The following exercise is also effective for practicing single vowel sounds and diphthongs:

Each student repeats the passage a few times depending on student level and ability.

Minimal pairs are words whose pronunciation differs by only a single sound, causing confusion for many EFL students. Teachers use these pairs of words to practice listening and pronunciation and help students recognize the minor differences between muted vowel sounds in English.

To understand stress, students should first be able to distinguish syllables. Every word in the English language can be broken down into syllables. Take a look at the following chart:

It is important to point out that every syllable has at least one vowel in it (with the exception of a rare few words).

To practice syllables and word stress, write a few words of varying lengths on the board. While reading them out loud, students clap their hands on each syllable. Additional words can be taken as needed from the text. With practice, students will be able to distinguish syllables on their own.

Once students are comfortable with syllable counts, they should start to listen for the accented syllable. Have students listen carefully as you enunciate the words. Let them guess which syllable is the stressed one. Students tend to pick on word stress quickly as well.

Afterwards, have students record how many syllables each word has, and which one is stressed. This can be followed up with a handout of words that students complete individually.

For example: (the | indicates the clapping of the hands, the underlined bold part is the stress)

With word stress, there are two rules to explain. The first one is: The stress in every word is almost always on a vowel. No matter what the word is, its stress occurs on one of its vowel sounds as vowels are the voiced parts of words.

You cannot stress a consonant by itself. Take a look at the following examples:

An example for where this rule doesn’t apply would be on a word that uses a “y” in place of a vowel, for example “pry.”

The second most important rule is: Every word only has ONLY ONE stress. If two different stresses are heard, then two different words are heard! However, there are several two-syllable words in English whose meaning and part of speech change when the stress is placed on different vowels.

Take a look at the following example:

There are other rules that can be introduced to advanced students to help with pronunciation training. They are more complex in nature, dictating where stress is placed according to part of speech, syllable count, and composition.

Students shouldn’t rely solely on these rules as there are many exceptions to them. A combination of repeated exposure and practice with application of the rules will yield the best results. 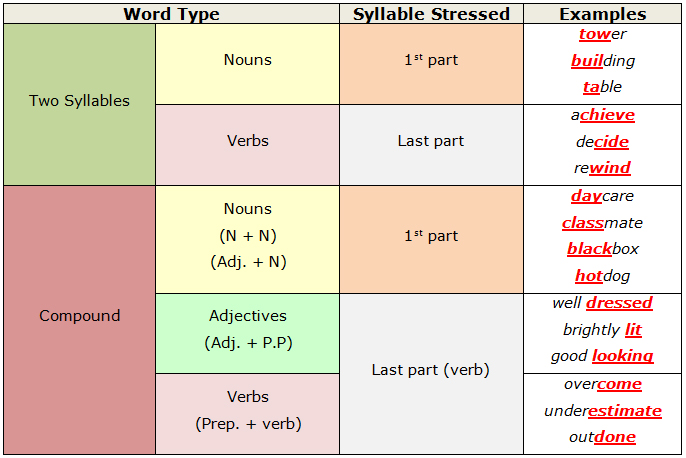 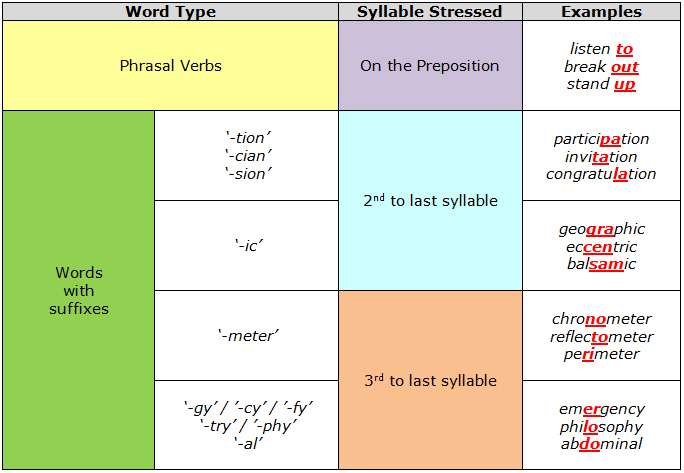