Prepositions can be difficult for EFL students. Why? Because there are barely any rules telling us when to use which preposition, and there are several different types!

Unfortunately, the only way to learn prepositions is by looking them up in a dictionary, reading, and memorizing their most common uses. But first, we need to know what they are and what they do.

Prepositions are used to connect nouns, pronouns, and/or phrases in a sentence to indicate their relation, to tell how they are related in space, in a place, in time, or as part of a thought or process. There are three main different types of prepositions:

on – expressing location on a surface:

at – expressing location at a physical point:

across – expressing a position or orientation:

over – positioned directly upward from:

in – positioned inside of something:

on – used for days and dates:

at – indicates a specific hour:

in – indicates an amount of time or period of the day:

until – indicates that an activity will continue up to a particular time:

during – indicates that an activity occurs simultaneously with a particular period of time:

for – indicates the duration of an activity:

from – to – indicates the beginning and ending of a period of time:

The following chart outlines specific examples of the use of the common prepositions: “at,” “in,” and “on” in the categories of both place and time: 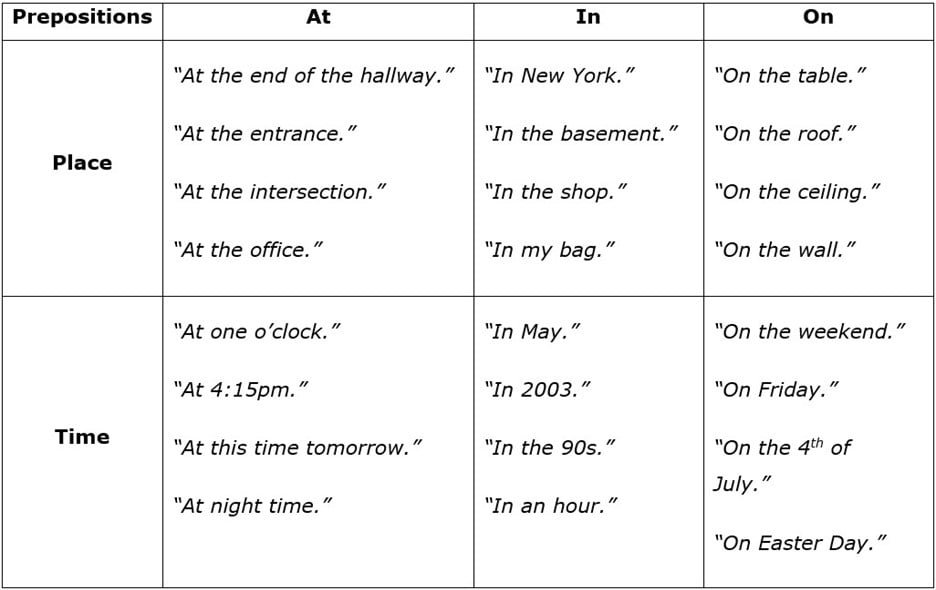 through – indicates movement within a delimited space

on – used to describe movement in the direction of a surface