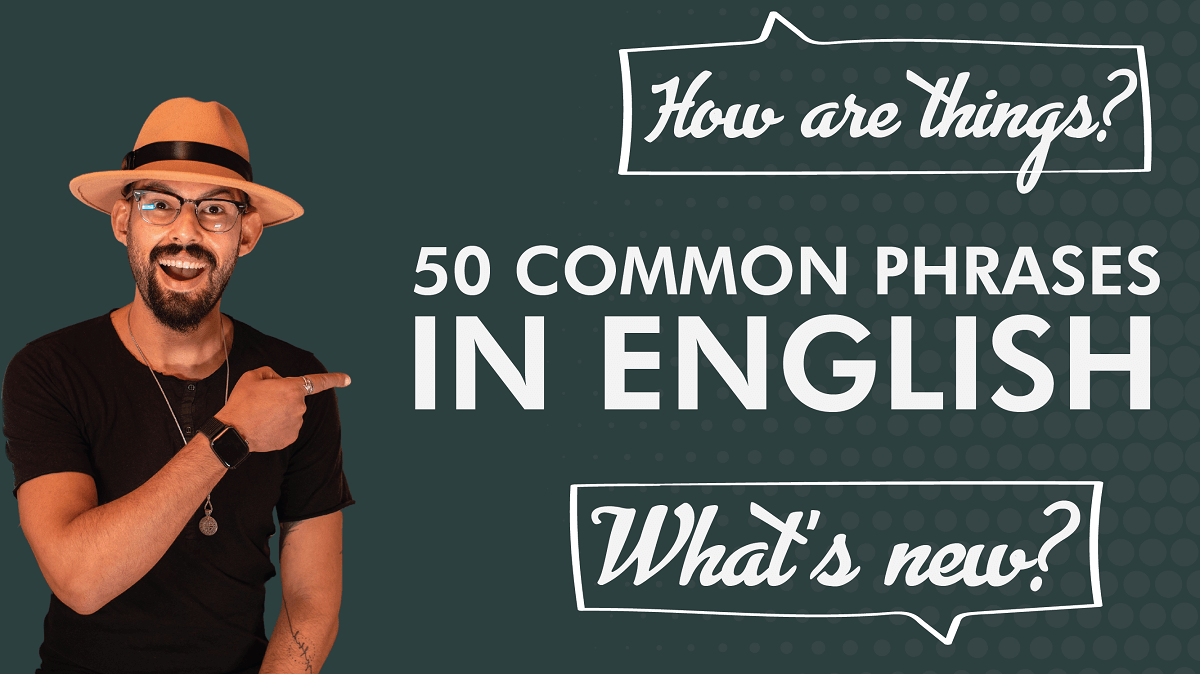 In this article you will learn the most commonly used English Phrases that will make your English sound more like a native, so it’s a good idea to master some of these phrases and expressions.  Here are 50 most common English phrases that we use every single day, with them you will enhance your English vocabulary and fluency.

Here are the expressions:

This is an informal phrase often used to ask someone how they have been doing or how things in their life have been going. It is often used when someone hasn’t seen you in a while. Often used with friends, family, or a neighbor.

Though grammatically incorrect, we do use it a lot. When you have missed a friend or a close family member, you can ask them this question. It sets the stage for more discussion and updates on what has been going on in someone’s life. You should only say this to friends, family members, and close co-workers.

Do you suspect that a friend has not updated you on his or her undertakings? So when you ask this phrase it means you’re seeking more updates on their lives,  business, work, or school. You want to know what they were doing. “So, what have you been up to?”

This is a typical answer to the question ‘how have you been?’ You can say this when your life has been good, but no major changes or breakthroughs. It is like saying that things could be worse, but you’re glad they are not.

It simply means: “Wow!” amazing used to emphasize or to express emotions such as surprise, anger, or excitement. In fact, native speakers use it a lot every day. For example “oh my gosh what a mess!!” or “oh my goodness I’ve never seen anything like that before”.

It means: definitely; certainly. For example:

It means “I understand.” Here is an example:

Sometimes, people say or do things that we do not expect. This is perhaps the best statement to say in reaction to that statement. It shows that you cannot believe what the person has said and you are asking for more information.

It’s not literally to buy something. It’s slang and it means to believe that something is true. It’s informal so you can use it only with friends and family members. An example:

It means: I realize”, “I understand”, “I know”. It’s used to emphasize that what you are saying is true even though it may be difficult to believe. There’s going to be trouble in the city if our team loses this championship, I can tell!

Meaning: Very fun and exciting; out of control,  but in a good way. “Last night’s party was off the chain!” “I know, right? Those mojitos  were off the hook.”

Meaning: A misfortune; to be disappointed or depressed. So here’s an example:

This is a phrase you might use them to agree with something that is being said or an idea someone explains. For instance, after reading an article you agree with, so you might say “That’s so true/ O couldn’t agree more This is commonly used in informal conversations.

This phrase is used to let someone know you are grateful for something they have done. Or to show them you are thankful for a favor they may have done for you. For instance “Thanks so much for picking up my hours last week, I appreciate that.”

This is a common phrase used to show how grateful or how much you appreciate what someone has done for you, or given you. If they have done a favor for you that you were not expecting you might say, “Thanks, that’s so kind of you.”

This phrase is used in common conversation when someone wants you to do them a favor and implies they will do one for you in return at a later date. For instance, in a work situation, they might say “can you complete the report for me, I will owe you one!”

Picture this: Nab comes to the office excited about something, but you cannot tell what it is. Later in the day, a friend breaks the news that Nab has been promoted to a new position. You can say “that explains it” to state that you now understand why he was so happy in the morning.

It is an expression of encouragement for something that someone has done or received. For example, You passed your exam – good for you!

This is what you would say to a friend, or family member showing curiosity in what’s going on with them in general. It is commonly used in circles of friends.

This is a phrase used to describe how you’re feeling when you are a bit down. You might say ‘I could be better” or “Things could be better.” Often used in an informal situation.

Life is full of unexpected things, surprises. When you are trying to explain the event to someone who cannot understand it, saying this phrase is a good show of vocabulary. It is sort of to say, “do not be so surprised”.

Used to show approval for someone’s success or good luck, Having a positive effect on someone or something.

This is perhaps the best reaction to something extremely unbelievable. If someone says or does something strange, bizarre, and out of the ordinary, say this to express your surprise and shock.

This phrase is used in an informal and formal situation. If someone you know just got news about a family member, friend, or colleague passing away you might say ‘I’m so sorry to hear that.”

This phrase can be used in 2 different ways. For instance, if you agree with something that’s being said you can say “tell me about it.” Or if a friend or colleague got some news you might say “You want to tell me about it?”

This phrase means “honestly”, or “seriously”. It is a statement of amazement. Used in casual or informal conversation among friends, or colleagues. For instance, “Are you for real?”

This is used if you are going to be late for a meeting or an appointment of some sort. It’s an apology for being tardy or not getting to a meeting on time. It also will let someone know you’re not going to be there at your scheduled time. It is often used in a formal conversation.

Somebody has been speaking fast or talked to you and you did not understand? Here is a polite way to ask them to repeat what they said. It shows that you were trying to hear and understand what they are saying.

Used when giving something to someone, usually after a request for something, such as giving someone goods that they have bought and also we as I told you so. “There you go – I knew you’d forget if you didn’t write it down”.

So you have returned to the meeting from a short distraction, and want to know how far you had gone with the meeting. Ask this question to try and revert to the mood and agenda of the meeting.

To be very excited or emotional, or to cause someone to be this way. An example: “Her latest album just freaked me out”.

This phrase lets people know you are very hungry and ready to eat. It is often used in casual circles but could be used at a meeting to let someone know you’re ready for your lunch or a break. It can be used in both a formal or informal conversation.

36) I’m feeling under the weather

This common phrase is used when someone is not feeling good, sick, or ill. “I’m feeling under the weather today.” This is an expression you would use when speaking to a friend or neighbor in an informal setting.

This phrase is used to describe how you may feel after a long day of work, or shopping or workout. It means you are tired or worn out. Often used in casual conversation the person may say after coming in from work “I’m beat, I’m going to lie down.”

This means to stop thinking about it, stop letting it bother you. This is a phrase used quite often in informal conversation. You might use it like “It’s been a week you should just get over it.”

This phrase says that something costs too much, or is too expensive. It is most commonly used in casual conversations between friends, family, or some colleagues.

So you have attended a job interview and you are hoping and praying for the best. When your friends ask how it went, you can say “fingers crossed” to express your optimism of a positive outcome. We traditionally cross our fingers when we are cheering our favorite team to win the match.

It means “Can you work in my place?”. Use this phrase when you need to ask someone to do you a favor. Use it when you need a colleague at work to replace you or do something on your behalf.

This phrase may be used when something can be done quickly like: “I can do that in no time!” or meaning it’s a breeze. This is definitely an informal conversation piece. However, in some situations, it can be used to answer your boss. For instance “When can you have the report done?”. “I can have it done in no time.” It would mean immediately.

46) You should go the extra mile

This common English statement means that you should work a little harder than you have before. It is often used to inspire, encourage and push someone to put in more effort, another way for the phrase “do not give up”.

It means “You convinced me on something”. When you sell something to someone, it means that you have won their confidence so well that they agree with you 100%. It is a statement meaning that someone has been convinced, enticed and induced to try whatever is being proposed.

If you are not in a rush to get something done you would be “taking your time”. This can be used to also tell someone not to rush to get it done. You might say “It’s okay you can take your time.”

This means someone is not as good as they used to be at something. They have lost their touch. For instance, you might say “Nab has lost his touch in basketball”. It is typically used in an informal conversation.

This phrase is commonly used in casual situations. It has 2 meanings: relax or rest. For instance, if you have been working too hard your friend might say “Why don’t you go home and take it easy.” The other one is to say goodbye to someone!

Do you want to see all of these phrases in a video, so you can practice listening and pronunciation?Check it out my Youtube vídeo here: https://www.youtube.com/watch?v=AnsdYxtNwg4

previousStop saying: “How are you?” // “I’m fine thank you”
nextOther way for: I don’t understand you!

2 thoughts on “50 Common Phrases in English”